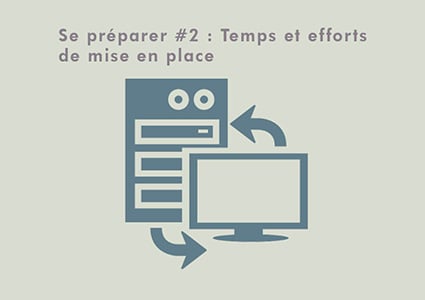 Any digital signage project starts with the installation of the system. A digital signage system necessitates physical equipment (players and/or servers), potentially network equipment and software (for management, creation, maintenance...). Depending on the type of architecture, is the difficulty of installation, and the time and efforts needed to get started.

The case of on premise hosted and hybrid models

With these architectures, it is necessary to equip each screen with a player before starting the broadcast. The need for extra network hardware is rare (for the players) since the client company generally implements the necessary infrastructure to connect the players to the local network (that is to say Ethernet outlets close to the players). One or more servers have to be installed on the network (generally in a server room) and communicate with the players.
If the installation of the players can be quick and easy (depending on the chosen provider), for the servers it’s a different story, considering it’s generally accompanied bu a lengthy configuration of the server itself, and of the network it’s hosted on (router, firewall...). The provider cannot intervene from a distance, and the configuration generally requires a collaboration between the provider (that has to go on-site) and the technical teams that have the required knowledge and authorisations for the internal network. Though the installation of servers is relatively rare (a server can support multiple players), the installation of the players is more frequent, most of all if the screen evolves regularly (it is necessary to equip each screen with a new player).
Lastly, the software that makes the system work has to be installed on the terminals used by the communicator’s, who are the only ones who can use it. The installation of proprietary software being generally accompanied by problems of some sort, the efforts can be substantial. This procedure is relatively rare though, if you don’t have to regularly install the software on new terminals (for new communicators).

With this architecture, it is also necessary to equip each screen with a signage player before starting to use the solution. The complexity of the installation depends of course on the chosen players (independent from the chosen model). The configuration of the players is however often minimal since the provider can intervene from afar to do it himself if necessary. Certain infrastructures require adding extra connectivity equipment. This can be the addition of a connection to a local network, or directly to the internet, through an Ethernet network, Wi-Fi, 3G, 4G... There is however no server that needs to be installed, and the software, generally accessible through a website, doesn’t necessitate any installation. Their configuration is generally done by the provider, from afar, and the client can start using the platform and communicate very quickly.

How will your fleet evolve?

The installation of an on premise (or hybrid) system requires more time and effort than a SaaS model before being functional. However, since the efforts are concentrated at the installation, they only appear once. Following the company’s strategy and probability of expanding their screen fleet, only the installation of players could be recurring. The better choice is then that of a provider who offers players with a simple and quick installation and configuration.
Moreover, whatever your system be, an extra delay may be necessary if the company has to manually configure or authorise incoming and outgoing connections from each of the players and servers (configuration of routers, firewall…). This step is thus also necessary to add a new player. It is however only necessary if the system uses the local network of the company and isn’t isolated on a dedicated local network or on a 3G network.
A SaaS architecture is thus often easier to install, less costly and necessitates less effort than an on premise or hybrid solution.

Take a look at the other articles in the series:
- Preparing yourself #3: Tech support and maintenance

Considering that each digital signage solution is different, ask the advice of an expert before equipping yourself.