While it can have multiple meanings (every service provider has a tendency to appropriate the term "synchronisation"), the term synchronisation of screens generally refers to the possibility of broadcasting the same content (or different contents) on multiple screens in a combined timeline. The contents are then broadcasted simoultaneously (if it concerns more elaborate visuals, the starting points of the broadcast can differ). This is the definition that we will use in the rest of the article.

The majority of the setups used can be summarised by these 4 illustrated cases. 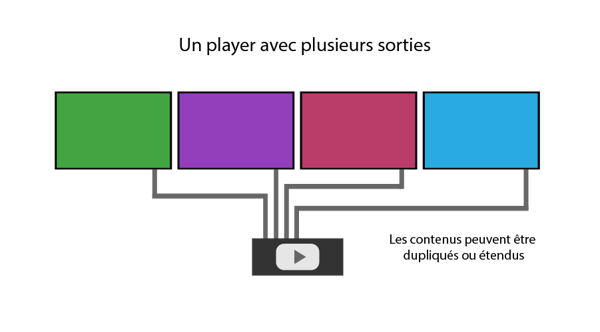 All the screens are directly connected to the player. While this setup is easy to install and necessitates only one player, most players have a limited number of video exits. They are also expensive. 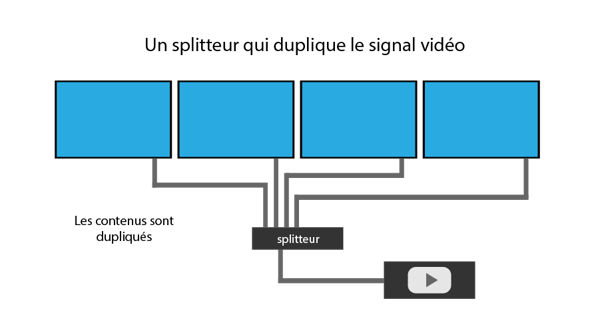 All screens are connected to a "splitter", which in turn is connected to the player. The splitter duplicates the content of the player through a large number of video exits and can be chained. They are also relatively cheap.

All screens are chained together, the first one is connected to the player. The screens need to be identical and support this feature. The screens also need to be sufficiently close not to require an excessive amount of cable for them to be connected, which could diminish the quality of the image. 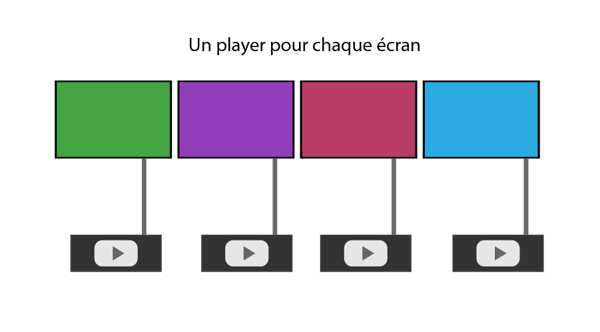 Each screen is connected to a different player. In this case it's the communicating players that synchronise between them. This solution implies that you need as much players as screens, which can be costly depending on the players that you use.

In the same way that a portable computer can identically replicate its content on an extra screen, it's possible to replicate the same content on closely placed screens : the screens are configured in such a manner that they will broadcast the same message at the same moment.

For an image with optimal quality, it is necessary that the resolution of the original content be on parr with the screens that has the best resolution.

This configuration is of little interest when it is used on a wall of screens, since the content is just duplicated as many times as there are screens. However, it's frequently used in train stations or malls where two-sided totems are normal. The sides of the totems, or even the entirety of the screens in an area are identically synchronized and broadcast the same content, (for example, the checkout registers of a large supermarket). This configuration has the avantage of giving the possibility of mutualisation of the player on multiple screens and thus to increase the number of expression spaces without having to increase the number of players.

The most frequent setups for this kind of synchronization are :

With this kind of setup, the content is fragmented in as many parts as there are equipped screens. Each fragment of content is simultaneously broadcasted on the screens. The ensemble of the screens then reforms the initial content. The disposition of the screens is of a primordial importance.

In the same way that a laptop can continue its content on an extra screen, it is possible to fragment a content on multiple adjacent screens. The screens configured in such a manner will then broadcast a fragment of the same content simultaneously.

For an optimal image quality, it is necessary that the resolution of the original content be such that it would be possible to “pick” distinct parts of at least equal resolution to that of the screens broadcasting the content-fragment. (For 4 1080p screens, 4K original content is advised) Moreover, the screens need to be close, with little space between them so that the result would be ideal.

Thi setup is mostly used for screen walls. The content is then broadcasted on a large surface, which increases the visibility. One can play with the screens to work around a piece of decoration or to better use some parts of the video. This setup is often chosen for the gigantism of the broadcasted images, the animation that it creates in the space and the crowds that it attracts.

The most often used setups for this kind of synchronization are :

This setup can be used to attract attention, using giant content displayed across all displays, which alternate with multiple content, each displayed on one screen and which broadcasts other information. Used in stations, it enables to broadcast promotional or informational content on all screens (giant content), then, secondly, the departure, arrival or delays of the next trains.

The most often used setups for this kind of synchronization are :

With this kind of setup, different screens broadcast content, that is or not synchronized, of the same lentgh or not. On demand (connected button, smartphone, url call, API…), content (replicated or fragmented) is broadcasted on all or a part of the equipped screens.

Perfect for attracting attention thanks to the possibility of outfitting a wall of screens, this setup allows to involve an audience, which will be more receptive to the message, since it is the actor that puts the broadcast into motion. This setup allows the use of triggers (connected buttons, the smartphone of the user through a QRCode for example) as a remote control. This remote allows you to control the broadcast of content on multiple screens and thus to synchronize on demand. In addition to the advantages of a screen wall, this setups allows for the benefits of interactivity.

Cenareo offers a simple complete and intuitive solution to manage your fleet of screens, from afar and from any device. Its plug&play player makes it possible to connect any screen in a matter of seconds, the rest happens online. Using a web interface you can add images, videos or documents from your computer, create other content with a creation tool developped for digital signage or integrate third party application to broadcast external content.

The interactive synchronization technology developped by Cenareo allows you to instantly and on demand, trigger synchronized content on a wall of screens. A temperature sensor, a connected button, or the scan of a QRCode can trigger the broadcast of content on a fleet of screens, in less than a few seconds...

Visit our article Dynamize your communication by coupling screens and connected objects to discover an example of an application.

To know more about the interactive synchronization technology of Cenareo, take a look at our website.