What is digital signage?

Digital signage is a communication tool that makes it possible to broadcast multimedia content, from afar and in realtime, on a network of digital displays located in public areas.

As a general rule, these digital displays are professional display screens, screen walls, and more rarely video projectors, interactive terminals, or television or computer screens. These displays can be placed inside (shops, showcases, businesses...) or outside (giant display panels, bus stops...).

The broadcast of content on the digital display is made possible by equipment that's connected to the screen. In the beginning of digital signage, this was often a VCR, then the DVD player and then it passed to the USB key, or the laptop. Today, most of the existing solutions use compact and dedicated equipment that, through an internet connection, allows for a constant update of content, in realtime and from afar. This piece of equipment is called the player. Certain screens and televisions have a built-in software that makes the added equipment superfluous.

The management of content that is to be broadcasted is generally done by software, installed on the communicators post (solely accessible through a computer or the local network) or on an internet platform (accessible through any device connected to the internet). The maintenance of a fleet of screens is generally done through the same software (or internet platform), but it can also be handed over to the technical teams.

It is to be noted that digital signage could also be known under other names, such as "dynamic signage", “digital display”, “interactive signage” or, more rarely, "digital media”, “public display” or even “digital out of home” and “out of home TV”.

What is its use?

Digital signage is a communication tool that makes the broadcast of messages possible, in the form of multimedia content to an audience, that can be of differing sizes and different degrees of heterogeneity, with the purpose of creating a relationship with this audience, or to transmit information to it..

It replaces billboards, paper leaflets, informations panels, slates and conventional signage, and has the advantages of being more attractive (to the audience), more flexible and more reactive (for the managers) : the broadcasted information can be modified in realtime. The scheduling of signage campaigns can be centralised and automatised, or it can be installed to answer to specific criteria (date, hour, weather, outside temperature, gender or age of the passers-by...). Digital signage allows us to target the audience to which one is talking, to diversify one's communication and to react rapidly.

Digital signage can thus be seen as an innovative way of communicating and as a major part of the digital transformation of shops and businesses which allows one to engage an audience efficiently and to send it instantaneous messages.

How does it work?

The communicator that wishes to broadcast information connects to the management software of the display system (on the dedicated post if it's an on-premise system or hybrid), or on any computer (if it's a SaaS system (Software as a Service)). He can then send in his content, if he has it, connect to feeds that are updated in realtime if the sofware allows it or create content, again if the software is capable of it. The user can then choose the screens on which he wants to broadcast, as well as the schedule of his content. The content is then sent to the players that broadcast the medium on the screens.

The on-premise system is constructed on the plan of a closed network. All of the equipment (player, server and management software) is installed in the business and communication with the outside is not allowed. The management of the communication or marketing can only be done inside the business (the computer needs to have acces to the local network). The maintenance also has to be conducted locally, since it's inaccessible from afar. This solution allows one to be the full owner of the equipment and to host the servers and management software yourself. The integration into an existing information system is often easier. However, it does not allow to interconnect multiple distant locations, and is often accompanied by high maintenance costs. 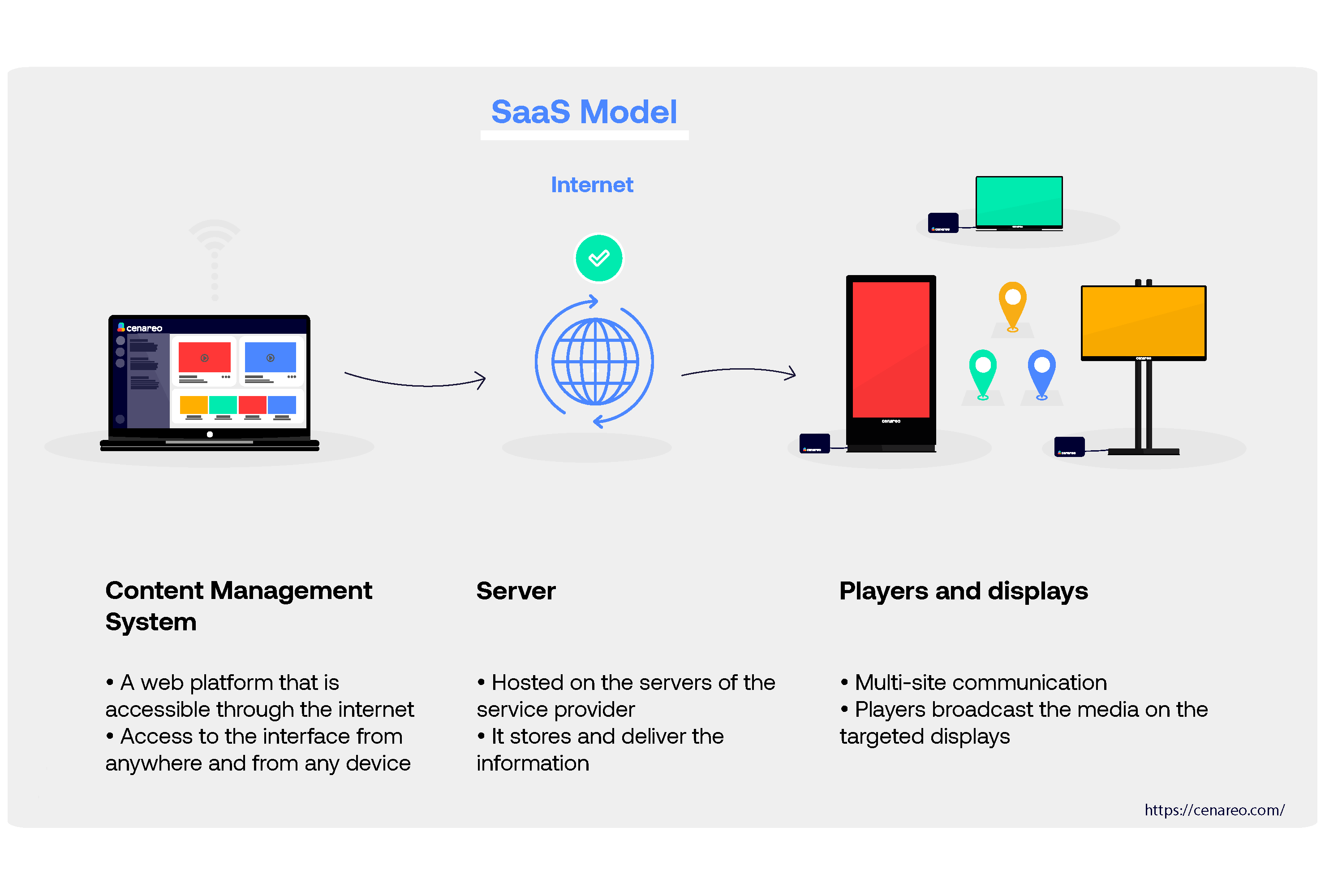 The SaaS system is characterised by the fact that the management software is in fact a web platform that is accessible through the internet. This solution allows for acces to the interface from anywhere and from any device. It also allows to centralise multi-site communication on one platform. It simplifies the maintenance of the sofware since it is hosted on the servers of the service provider. However, in bigger structures the integration into an existing information system can be a tad tricky.

The hybrid system rests in part on a closed plan and borrows characteristics from both other systems. While all the equipment is installed in the business (player, server and management software), the server can communicate with the outside through the internet. The management of the communication can only happen inside the business (the managing computer needs acces to the local network). However, the server can communicate with the outside, most notably to find data that isn't available on the inside. While this solution does allow for a larger range of services, it is also more complex to install, more expensive, and rarely reaches the security of an on-premise solution, or the flexibility of a SaaS solution.

Why use digital signage?

Digital signage is an all-round tool, powerfull and nevertheless complex, with the ability to be used for a great number of differing objectives. Each case will find its own advantages in the use of a digital signage system. The most current ones are listed below.

The majority of digital signage solutions use internet to transmit the messages that are to be broadcasted. In so doing, the information can move rapidly between the senders computer and the broadcasting screen, thus the update of realtime content becomes possible.

The same content can be broadcasted on a large number of screens, on part of a fleet of screens or concetrated on one screen. The communication can then become uniform and synchronised multiple screens. An SaaS platform also allows to dispatch the content over screens placed in different distant locations.

The majority of the solutions make it possible to associate content to a calender and broadcast hours. The content will then only be aired during the selected hours. This makes it possible to create an evolving plan over the course of a day, a week, a month, a year...

A screen allows the display of images, videos, and texts divided over time. Thus it offers, for the same time period, more epression space than a static display.

It's possible to contextualise your broadcasts and to privilege the broadcast of one or more display campaigns depending on specific criteria (date, hour, weather, outside temperetaure, gender or age of the passers-by...) or to end the broadcast entirely. (For example, it's possible to privilige the promotion of bathing suits on days when it's hotter than 30 degrees celsius).

Digital signage, thanks to it demultiplication of display space, enables the renting or selling of space to other adverstisers, which gives a monetary incentive to the owners of the display and often finances its cost.

While digital signage has considerable advantages for an efficient communication plan, its benefits need to be nuanced as well.

It's true that the screens and players consume energy, on a permanent basis. Certain systems allow for a schedule to be created that fixes hours during which the screen will be turned off, which can lower the consumption of energy. Moreover, the permanent technological developments of players and screens contribute to a more and more energy- and eco-friendly approach.

The animation of the visuals, which is also mentioned as an advantage, can change into a drawback when little care is taken to make the content as good as possible. It's true that animated content can make your screens a visual nuisance. By attracting the eye, a digital signage display can be a danger on the side of the road.

Moreover, because of its electronic and electric components a digital signage display is more sensitive to outside agression. It has a harder time than paper billboards to overcome rain, sun, extreme heat or glacial cold.

Digital signage is a very flexible tool that isn't limited to one specific activity. Since it offers many features, it seduces many different sectors. It is used in airports, metros, busses, train stations, harbours, and others mostly as information signage for the travellers. It's equally used in large businesses to inform the employees. Digital signage is also used in hotels, schools, museums, institutions, administrations, restaurants and hospitals… Lastly, it's also very sought after in shops or in the street for the businesses or marketing firms that look to publicise their product.