Identifying the ideal position for a digital signage screen allows you to boost the impact of the broadcasted messages, mostly when this placement is correlated to the targeted audience and the strategy of the broadcasted content. However, badly placing a screen can, much more easily, give off a bad brand image, make the messages have only very little impact and, of course, waste all the effort, time and money invested in an on-screen communication project. After having asked yourself the right questions when it comes to the choice for the placement of your digital signage screens, avoiding bad zones becomes a necessity.

Avoid putting your screens too high

While putting a screen high up might seem like a good idea, since they’re then visible from a larger distance, they are however, generally, not even noticed! It’s true that our natural tendency is to look at others, or to verify where we put our feet, thus we generally don’t even look up into the air, which makes high placed screens near to invisible. Moreover, the position in which we can see them (head folded backwards), is not a comfortable one (which gives a negative impression), thus, even if the screens are seen, they’re only looked at for a very short time, and this regardless of the quality of the content.

Avoid zones with a high luminosity

It’s not going to come as a surprise to say that the luminosity of a screen and its environment can make it harder to read the messages. Badly positioned, a screen can have a reflection, or can be against the light, which, in both cases, hurts the legibility of the messages. In the same way a screen that is too luminous in a dusky environment (party, dimly lit room) can blind us (mostly if the content background is white) and to the contrary, a feebly lit screen can become illegible in a very luminous environment (sunny day, strongly lit room…). Identify the luminous zones and their evolution during the day, and avoid placing your screens in zones that could fall victim to the light. 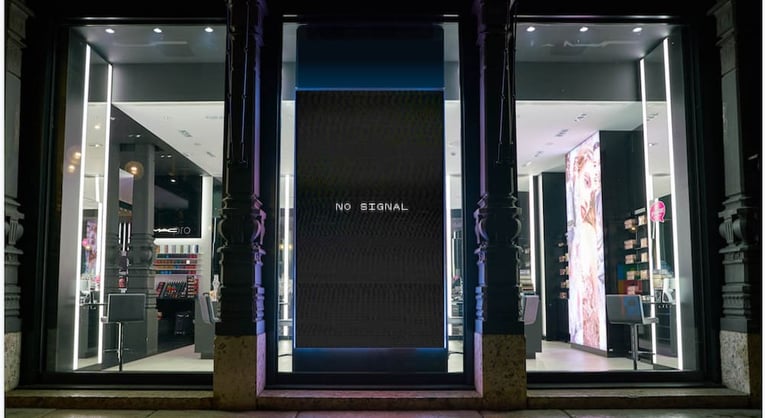 Avoid placing a screen because of technical reasons

Of course, it’s easier to place a screen where there is already an electrical outlet, where there is no need to do work, or to put some cable down. It would seem to make sense from a financial perspective as well. Yet, if the outlets weren’t installed for this specific constraint, it’s generally a bad idea. In the same way as it’s a bad idea to let the person who installs the screen choose the best place to put it. If a well-placed screen can be very efficient and improve the impact of the messages that it broadcasts, a badly placed one can degrade the brand image, and furthermore give no reach whatsoever to your broadcasted messages and thus waste all the effort, time and money invested in the setup of the system. Foregoing your target audience because you don’t want to pull some cables is a bit of shame. Including the placement of the screen in a global strategy, and creating a real reflection around its installation, is, in the long term much more profitable.

Avoid broadcasting the wrong message on a well-placed screen

Broadcasting a 15 second message on a screen that people generally pass by in 3 seconds is far from efficient! To maximise the impact of your messages, it’s important to identify the type of location of your screens and to use it according to your target audiences and your objectives. Each location is great for a type of message and bad for the others. It is necessary to find the right message for the right screen location!

Avoid placing a screen in the “decompression zone”

The term “decompression zone” describes the some-odd meters after the entry (of a shop, an establishment...). The screens or posters in this zone (for the newcomers) are generally invisible: the visitors generally arrive rapidly in a shop, or, at least, experience a brutal change in environment between inside and outside. They also change mental state (particularly if they come from the outside), they decompress, which takes a couple of seconds, and thus some meters, during those seconds their mind is not really receptive...

Particularly at the step of creation (or validation) of screen content, it’s important to keep in mind the conditions in which these contents will be broadcasted and seen. Following the placement of the screen, the distance of the visitor, the target, its level of attention, the number of people, the hour of the day… the conditions may not always be optimal to guarantee a perfect vision. Maybe a head will be in front of the screen, it might be visible for only two seconds, that it will be seen at an angle, that a small reflection might hide a part of the screen or that the people will be thinking about something else while passing by the screen. Even if it is of course preferable to avoid placing your screen in such a location, it remains necessary to keep them in mind at the time of the creation of the content. (You can always bet on simple elements: plain colours, large font sizes, large images, strong contrast… and don’t judge the quality of content sitting in front of your computer at 30 cm distance in ideal visioning conditions.)

Committing or not committing the screen positioning error?

If avoiding these mistakes seems common sense, they’re nevertheless frequent, and hard to correct one they’re committed. (It’s hard to move an already installed screen, and to convince the hierarchy that 30cm to the left, and a 10° change in angle will make the difference). However these, in the long term costly and wasteful errors, can be very easily avoided in the very beginning, by integrating the choice of screen placement in to the screen communication strategy from its inception, and by regularly checking the broadcasted content, the targets and the to-be positioned screens, and matching them up!