Sometimes wrongfully delegated to the technical crew, or to the installers, the choice of placement of the screens of a digital signage solution constitutes a significant element in a digital communication strategy. First of all, it is necessary to understand that any place, consists of a number of zones, which offer different potential advantages for communication.

Though the multitude of installations, scenario’s and objectives makes generalisations difficult, it is possible to identify the right questions to ask yourself, the main errors to avoid or to just give some advice.

The placement of screens, a crucial element

A digital signage solution is a tool that allows you to communicate on screens in an extremely efficient manner (more information can be found here understanding digital signage). More attractive than simple posters, it also enables the broadcast of multiple info’s simultaneously, the screens are the perfect allies of communicators to simply and rapidly broadcast a message.

To guarantee an optimal impact of the messages, they have to be well constructed, (the form and message), directed at the right people, and shown on the right screens, installed in the right places. It seems obvious not to dissociate the target, the broadcasted content and the placement of the signage screens. They have to be integrated in a global communication strategy, with clear and identified objectives. Quite often, it is from this strategy that the desire to install such a system is born, it is then important, not to forget it when positioning your screens. This will is also accompanied by objectives, of communication, target communication, an audience, which means people, humans if you will...

Efficiently messaging to people is thus the ultimate goal that motivates the installation of a digital signage solution. Informing, entertaining, selling, promoting or educating… the possible objectives are numerous, diverse and varied, quite like the targets. But a screen, situated in a specific place, cannot serve them all. There are numerous different uses, numerous different objectives for such a system, and just as many exceptions. As such, each case is unique, and following some kind of “miracle recipe” for the positioning of the screens would be an illusion. Nevertheless, these pages will help you ask the right questions and find the places with the most potential.

Once the objectives are identified, one of the first interrogations should be about the target, the people you want to reach. A good study, and a good understanding of that study, will lead to a better knowledge about the expectations in terms of information (which will guide the content) and of the movements and behaviour in your establishment (which will guide the choice of placement).

From this analysis will come the identification of the main stream of visitors, the detection of zones with substantial traffic (which will have to be privileged), area’s where people wait, standing still (the waiting area’s), and zones where people pass through, generally without stopping (the passage zones).

In this period of digital transformation, many companies try every day to improve the consumer experience in their POS, or their internal co-worker experience. These efforts aim to reduce waiting times, and normally start by the modification of the offered services, or by the addition of digital tools (automatic checkout terminal, drive, system of queue management…). Nevertheless, even with these efforts we’re often confronted with waiting periods (doctor’s waiting room, supermarket queue, waiting at the car mechanic for him to fetch the keys of the freshly repaired car, at the bar, waiting for the beer to be served or the payment taken, in front of the coffee machine, during the time that it’s flowing…). The examples are infinite.

These moments, often ignored, are instants when the mind is unoccupied, or at the very least not too occupied (the task that necessitates concentration is already finished). At that points, the mind is open, receptive, and even looking for any message that could distract it. The eyes will be looking around on where to stop, for a thing to read, to occupy them. Put yourself in the place of the person (physically, in your establishment) and detect the places where your eyes land naturally… Isn’t this a perfect place to put a screen?

This type of placement, in a waiting area, brings the specificity of a relatively long exposal time (the length depends on the context of course). A screen positioned in such a place would be there to occupy the people for at least some ten or twenty seconds (sometimes even minutes). The broadcasted content can be entertaining, educational or informative. What has to be avoided is the broadcast of the same thing multiple times while one specific person is still waiting (it would send a bad image). This format thus authorises relatively long and detailed content (at the condition of it being well structured), and requires decreasing the frequency of content broadcast (for example by increasing the amount of content to be broadcasted). 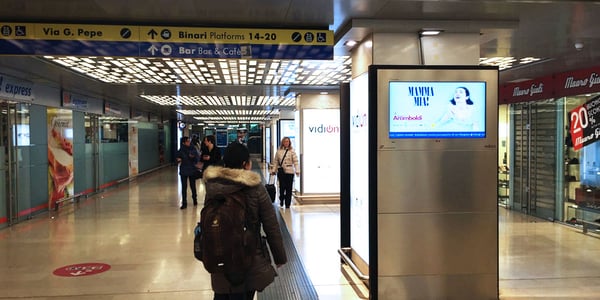 When we’re not waiting in a stationary area, we’re moving, generally quite rapidly. And, even when we take the time to look at screens for a couple moments, we generally don’t stand around for long.

Considering this, these zones can be characterised by a relatively short exposition time, only a couple seconds. It then becomes necessary to adapt the content strategy to this particular zone: the objective of such signage is more the attracting of attention, the giving of an idea, the introduction of a (brand) name, or a teaser (more than really trying to transmit complete information) !

And to do this the format has to be short, a couple seconds only give you the time for a couple words. Of course, the messages will have to be created for the occasion while taking care to maximise the visibility of the content (legible font, large size, high contrast…). In the same way, a quick animation could attract the gaze, but shouldn’t interfere with the reading… Losing 2 seconds on an animation out of the 4 seconds you have would be a mistake. Lastly, the broadcast frequency can be high: since the people aren’t going to be looking at the screen for long periods of time they won’t see the repetition of the messages.

For example, in the case of a shop offering promotions on new products, it would without doubt be more efficient to rapidly announce the promotions in a passage zone and to reserve more detail about these promotions for a waiting area, or for an area close to the promoted items, there where those that are interested will be looking for specific information. 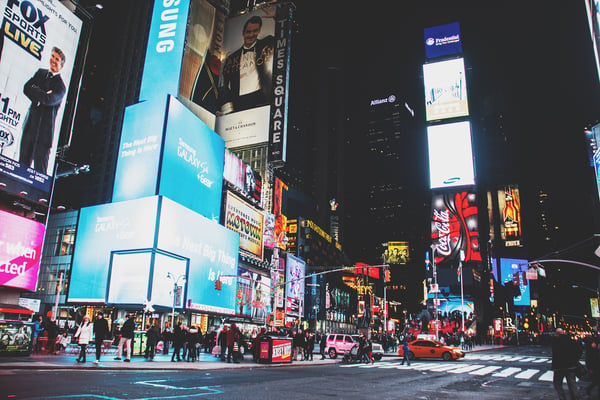 Position of the screen and content strategy, two inseparable elements

Outfitting yourself with digital signage screens, and generally with a digital signage system is costly: no aspect of the installation should therefore be neglected. In the same way that a content strategy or the understanding of the targets, the placement of the screens can play a role in the success of failure of a digital signage project (a badly placed screen, a malformed message, or one that isn’t well targeted degrade the image of the company more than they boost it, however a good message on a well-placed screen will surely improve the brand image significantly).

Of course, it is necessary to integrate these 3 aspects in to the ensemble of the screen communication strategy, and to identify the expected objectives and the targeted audience before even putting in the first screw!