The placement of digital signage screens plays a vital role in their success. Though it remains true that the saying: “content is king”, has never been as true as it is today, your content still needs to be seen, the screens need to be turned on (but that’s another story), and well positioned (to be seen by a target audience).

Whatever the place may be where your screens will go, to zones can be identified with different target audiences. These zones will also influence the type of on-screen content that will be used by the way. Passageways will win out with short messages that have a strong impact, waiting rooms can allow themselves to send out longer more detailed messages. Find out the details about the different kinds of zones to choose the best place to put your digital signage screens in our last article. In a more practical way, the following questions will guide you to identify the locations with the highest potential.

Where is the sun?

And even more generally, where are the light sources? In relation to the screen and to the visitors? And how do they evolve during the day? Will the screen be exposed to the same amoung of light in the morning and the afternoon? Do you have to create an automatic luminosity change in the screens settings according to the hour of the day (a feature you should look for when choosing screens)? If the screen faces the light, will the reflections be hurtful to the visibility and legibility of the message? In which case, is it possible to dim down this light? Or to prevent the reflections? If the screen is facing away from the light, will it still be possible to read everything if it’s against the light? Maximise the visibility of your messages by considering the problem of lighting at the moment you decide where to put your screens.

Who is the target?

Since each person moves, stands, waits and evolves in a different manner, it’s impossible to reach everyone with the same screen. It then becomes crucial to identify the (main) target of a certain zone and screen to broadcast the right message. If the objective is to inform your employees about the ongoing evolutions, do you have to put screens in the window showcase? If the objective is to inform students, is it useful to put a screen in the teacher’s room? If the objective is to show your co-workers the traffic on the roads for the way back, a screen near the exit of the building and facing inside is probably a good idea. Make sure to identify the target of your messages correctly. Beyond the guarantee of creating tailored content, it’s also a useful indication for where to place your screens.

Where is the target audience heading?

Once the objectives are defined and the target audience is identified, one of the first things to do is to find the places where this audience moves and stands. On one side, it will allow you to identify the zones where more people pass through than in others (statistically, screens in these zones are more likely to reach the target audience than in others), but you could also look for paths privileged by the target audience (for example, avoiding the central patio of the reception hall by the right rather than by the left). The analysis of the movement of the target audience could also show movement habits that might seem difficult to comprehend at first. For example, co-workers enter the company by bypassing the reception hall to the right, and leave by bypassing it to the left. In this case it would be good to adapt the screen angles (for example one on each side of the reception hall patio) to face, towards the entry on the right side, and away from it on the left. In the same way, the road clients take in a store can become quite clear: it’s up to you to find them and to place the screens in the right places AND to turn them in the right directions. Make it a priority of yours to observe the habits of your target audience in order to detect the ways in which they move and circulate in your establishment, as well as the direction of their movement: your screens will have a higher chance of being seen and your messages will win out in terms of impact. 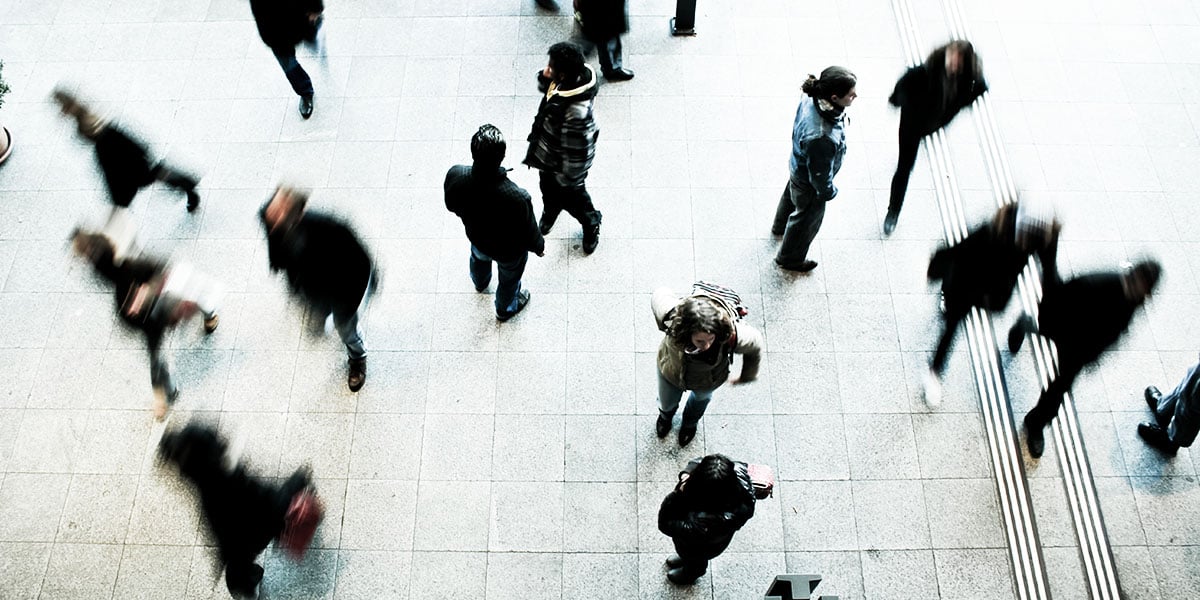 Where does the target audience wait?

It is often more profitable to show a message to people who are waiting than to people who are moving. The truth is, messages can be longer, more detailed, the broadcasted information is more complete, and will therefore be better remembered. Moreover, people who are waiting are more receptive to any message, whatever it be. It is crucial to identify the spots where people (more importantly the people that you want to target) wait. To valorize message the most, privilege screens in waiting zones: the broadcasted content can then contain more information and the audience will be more receptive.

Where do people look?

As a general rule, even more important for screen in a passageway, where people are moving, it is rare that they look at all times for installed screens. It thus becomes necessary to identify the zones that attract the eye. An ideally positioned screen should be in the line of sight from every position in a certain zone. Our eyes being naturally attracted by other humans, and most notably their eyes, a screen placed in such a way that it would intercept those looks seems like a good idea. In the same way, when we move, we generally keep an eye for our next steps. A screen that’s too high up and would oblige us to look up would be rarely seen, or looked at for a long time. Intercepting the natural look with screens, that is the way to give your messages the most chance of being seen.

The best content in the world will have only very limited effect if it’s broadcasted towards a wall! As a general rule, if the target won’t look at the screens, your efforts will be wasted. For an optimal impact of your messages, a good knowledge of your target audience is necessary. Understanding its state of mind will guide the creation of pertinent messages, while understanding its movements will guide the placement of the screens. If a major part of this question is idenitying this target audience, it’s because the question is not finding the best place for a screen, but the best place for a screen for a target audience (and a type of content).